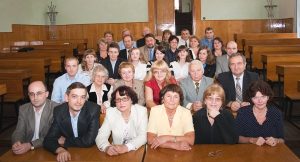 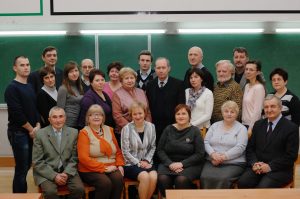 The Department of Analytical Chemistry of Lviv University is classic department of analytical chemistry with long-term traditions combined with modern approaches and innovative trends. The department provides the teaching of theory and the development of practical skills from chemical, physico-chemical and some physical methods of analysis necessary to become highly professional experts in analytical chemistry.

A Brief History of the Department of Analytical Chemistry

The Department of Analytical Chemistry was created in 1944-45. F. Pless, Y. Grabovsky, Y. Schramm, B. Liakhovich, S. Tolochko and S. Weisberg were the first professors at the Lviv University who taught analytical chemistry in German at the Faculty of Philosophy (since 1851) and later at the Faculty of Medicine (since 1895).

Prof. Tzhebyatovsky V. and Kemul V. taught analytical chemistry at the beginning of the twentieth century. Since 1931 Kemul V.  introduced polarography to determine small quantities of substances and began to investigate the effect of surface-active substances on electrode processes as well.

The research work of the Analytical Chemistry Department was performed in the following areas:

The sorption behavior of Pr(III), Gd(III), Lu(III) from aqueous solutions using natural and H-forms of Transcarpathian clinoptilolite have been studied. The methods of Pr(III), Gd(III) and Lu(III) concentration using solid phase extraction are proposed. The conditions for the separation of Gd(III) and Tb(III), which belong to the yttrium group were found using H-clinoptilolite. The optimal conditions for the process of platyphilin oxidation by 2KHSO5∙KHSO4∙K2SO4 have been determined. A voltammetric method of the alkaloid platyphylline determination is developed. The oxidation product is most probably the platyphylline N-oxide, which is capable to reduction on the mercury dropping electrode. The amoxicillin interaction with the sulphanilic acid, sulphanilamide, sulphathiazole and benzidine has been studied. On the basis of the established optimal reaction conditions new methods of amoxicillin spectrophotometric determination were developed. The selectivity of amoxicillin spectrophotometric determination in the presence of auxiliary substances (excipients and preservatives) and bioactive substances has been investigated. The elaborated methods have been approved during the analyses of model solutions and the single- and multicomponent medicinal formulation. The antimicrobial properties of clinoptilolite in compositions with Ag+ and Mn2+ toward typical strains of the pathogenic gram-negative bacteria Escherichia coli and Pseudomonas aeruginosa were investigated. Screening for survival of epitheloid cell lines (carcinoma), mesenchymal cell lines (glioma), pseudonormal mouse fibroblasts cell line NIH 373 and human embryonic kidney cell line HEK 293 in the presence of zeolites spiked with mono-(Ag+), di-(Cu2+, Zn2+), tri-(rare earths: Gd3+, Ga3+,  Lu3+,  Tb3+, Yb3+, Ce3+, Nd3+)valent cations using MTT assay has been carried out. It is established that the most signified toxic effects have samples with silver. The effect of inhibition of biomass growth has a weak dose-dependent effect, which suggests that the cytostatic process predominates over its own toxicity.

Scientists of the department of analytical chemistry collaborate with several foreign scientific establishments and firms. Their list with achievements obtained in 2019 is given below: